Impact of Retail Grocers in America

(April 25, 2013)  On Tuesday, The National Grocers Association released its highly anticipated results of a new study detailing the importance and influence of independent grocers on America’s economy. The study, which can be found here, details the incredible impact of the industry on sales, jobs, wages, and taxes broken down from the nationwide to state and congressional district level.

The results were released during a scheduled press conference on Capitol Hill in the House Agriculture Committee Room. Among the keynote speakers was OGA President & CEO Nate Filler, who spoke of the impressive research and of the importance of the independent grocer in Ohio. On a state level, independent grocers are directly responsible for 44,370 jobs and these jobs generate $1.2 billion in wages paid to the employees. Furthermore, the entire independent grocer industry and their employees generate roughly $560 million in state and local taxes, or 2.13 percent of the Ohio total. 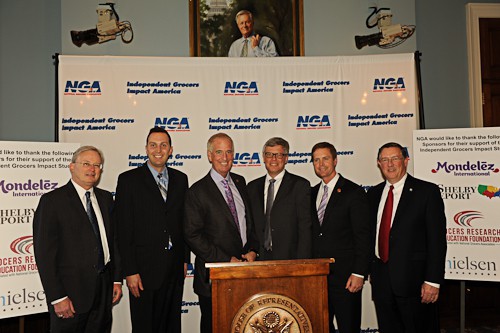